Winter of 2019-20; Just Fleeting Illusions Thus Far? The Groundhog had his say and...

Early Spring according to Punxsutawney Phil in Pennsylvania! And not to be outdone; closer to home; Michigan's official groundhog,Woody the Woodchuck agrees with that Early Spring forecast. Though it was sunny when I woke up at 9AM EST and shadows everywhere! My question is; where was winter?

The pattern of this cold season's weather since November had strongly resembled last cold season's /2018-19/ up until recently. Both winter's contained mild, well below normal snowfalls in December and in this January; basically extended that mild pattern. There was a decisive split in the road the last third of this January. Temperatures remained mild through the month while last winter; Southeast Lower Michigan was flooded with arctic air the last 10 days of January! In fact this January; numerous days were above normal with 10 of those days averaging 10 degrees or higher above normal. In quite the contrast; during last January's cold snap at the end of the month; the last two days averaged better than 30 degrees below normal! In one sentence; January 2019 was close to nine /+8.6/  degrees colder than January 2020! Therefore; you'd expect this January's heating bill to show a marked savings over last January's. 😊

Note the LCD's for both January's for Detroit 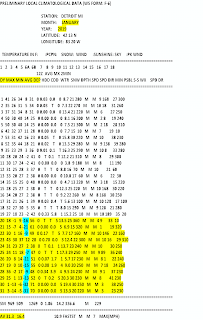 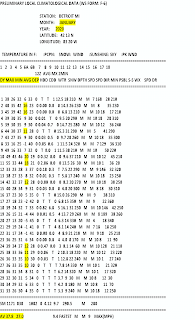 Even though, the analogues, long term models and obviously "climo" suggested colder weather in January resulting in the storm track further south/east in time; it was stubborn to remain so with each advection of cold, polar air. And thus; the majority of our precipitation events remained rain or rain/snow as the center of main storms rode west/north of Southeast Michigan. Interestingly in the trend of the analogues; if the winter started out mild in December it continued most years into January - 71% of the time (5 out of 7). Only the very early first two years (1885-86 & 1891-92) did the patter flip to cold. Analogue trend was your friend most years if you liked it mild.


From the Winter Outlook 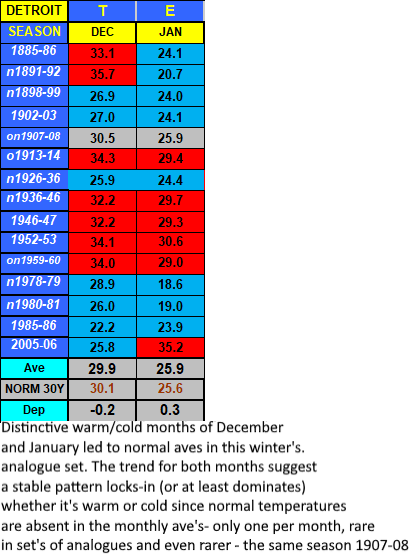 And that is exactly what happened with the pattern locking in December through January.

The mild December continued right through January this winter as did the wet pattern with above normal rains at 6.46"/ +1.98". Snowfalls picked up somewhat in January from December's paltry amount. With December's 35.1 average temperature (18th warmest December) and January's 32.4 (12th warmest January); that leaves us with a winter average thus far of 33.8. Well above the normal average 27.9 through January with a departure +5.9 degrees. Snowfall trend has been below normal with just a couple of notable snows (and of course one of those in November). Snowfall up through January 31st for the entire snow season came in at 21.9 thus far or -1.8 departure. What makes this winter seem so snowless is that during climatological winter (Dec-Feb) thus far; only a foot /12.4"/ has fallen or 9.7 below normal.

Our weather models have been very erratic leading to low confidence with their output this winter with forecasting a storm here, dropping the storm there more than a couple days. The stability of the model trends have left much to be desired this season. What storms have developed this winter; again like last winter,  moved basically northwest of Southeast Lower Michigan leaving us in the milder, rainy side of most storms. There's only been two notable storms this snow season. The first was in the fall on the doorstep of winter, Veteran's Day, while the other occurred a few weeks ago in mid January, on the 18th. Somewhat surprising; both snows were able to set a daily record for snowfall amounts; Veteran's Day with 8.5" on November 11th and 6.8" for the second daily snowfall record on January 18th. Other than that; this winter has been rather mild and dull with not much to speak about.

Ok, then if that's the case thus far; what did the analogue trends for the remainder of  cold season /Feb-through mid Apr/ show for Southeast Lower Michigan.


First of all; temps though March 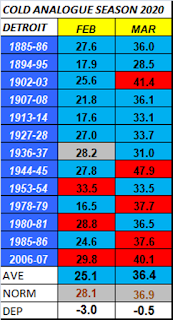 Clearly February for the cold season had the best chance average the coldest of the cold season months with 9 colder, 1 normal and 3 warmer. Meanwhile; March displays a closer pattern as seen earlier in the winter with 8 colder and 5 warmer months. Here's a refresher for the remainder of the season... 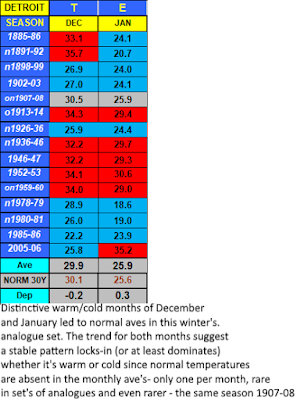 The way this "winter" has been going, "the best chance for coldest month" wouldn't be that hard to make since both December and January both averaged up in the 30s. If that does happen, it doesn't necessarily have to be below normal since anything below 32.4 (January's average would be the coldest month, thus far). But that only applies to coldest month for the winter. According to the February data; February averaged -3.0 of normal with 25.1. And; anything below normal would suffice too considering the mild weather this winter. So therefore, temperature trend and actual departure below normal would be two for two and I'm less hopeful on that second one.


Back in November; I expected temperatures this winter to average around normal to below (+1.0 to -3.0 departure) and that was on a projected ENSO becoming Neutral. Thus far however; the SST's have remained just above normal with the latest NINO 3.4 area as of early February at +0.8C and thus; flirting with a weak El Nino which I believe this winter has behaved more like. This and the a strong Polar Vortex meandering  and remaining over the North Pole (leading to a +NAO/+AO) has led to mild conditions across the country. Looking at past - and present outlook for February; temperatures in Southeast Lower Michigan should average +1.0 to +3.0 above normal for the entire winter /Dec-Feb/. 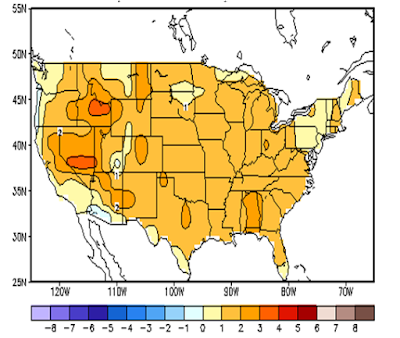 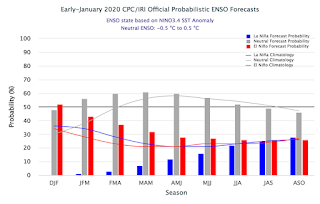 Februarys The coldest of the winter weather is projected during the second half  - January into February or February-March. One of the more definitive patterns seen is the evolution of this colder weather with time with February having the best chance of below normal temperatures and...some hefty snowfalls and extremely light ones averaging out to normal.

March/April -Snowfalls picked up late in the season; averaging above in April.

Snowfalls for the rest of the snow season are interesting in as far as potentials. 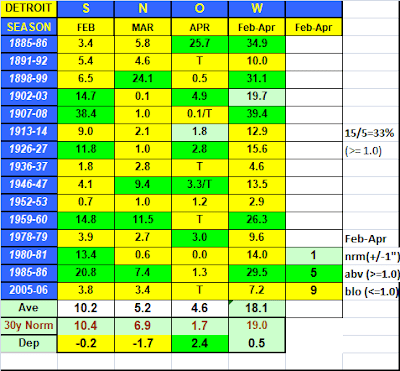 Statistically; data shows a 33% chance of significant snowfalls (to total above normal the remainder of the season) with 5 out of the 15 containing significant snows. Of course; 67% of the time snowfalls were below and one just normal. Therefore in this data; the highest chance for the winter's remaining total snowfall is below the normal total of 42.7" And; with 22.4" through February 4th; we have over 20" to make up for a normal season (and we'll start the 5th and 6th anyway).

Making weather fun while we all learn,
Bill Deedler - SEMI_WeatherHistorian


Posted by WeatherHistorian_SeMI at 8:15 PM No comments: Links to this post